Hey friends! I hope you’re having a good week so far! Things over here have taken a bit of a dive on the sleep front. While we haven’t been getting great sleep since Rhett’s arrival, the past few days have been especially intense. I’m planning to follow up with our pediatrician because Rhett is spitting up a decent amount (as in regularly — not a large volume of spit up) and he seems bothered by some digestive/potential reflux issues at the moment. I remember reading in the past that this can often surface when babies are around 2-3 weeks old and I’m thinking this may be our issue.

Rhett continues to fuss and seems uncomfortable whenever we place him on his back in the bassinet and wants to be held or rocked or placed more upright in a swing instead. I’m hoping that if it is reflux, it’s relatively mild at this point since he’s not spitting up tons of milk when he spits up and it’s mostly just little amounts frequently after nursing. Have any of you been through this before? How did you get your little one to settle? What did you do about nighttime sleep? How did you sleep? Haaalp! In so many ways I feel a million times more relaxed about the newborn baby phase since this is our third rodeo but this just goes to show we always have something new to learn when it comes to little ones and motherhood.

My mom is leaving on Friday and I cannot say how grateful I’ve been for her help and Ryan’s help with Rhett (and Chase and Ryder!) right now because earlier this week I hit a major wall after several nights of horrible sleep. (Go figure last night was finally a better night so I’m feeling pretty good today!) Ryan and my mom have jumped in and helped in a big way the past few days so I could get a few solid, uninterrupted hours of sleep which truly saved me. Life with a newborn ebbs and flows so much and I almost forgot how some days you feel like you’re flyin’ high only to feel like a tiny little 7-pound baby completely kicked your butt the next.

I didn’t mean to start today’s blog post with a deep-dive into baby sleep mayhem, but clearly that’s a big part of life over here right now! What I initially sat down to blog about today was our day yesterday. It’s been a little more than a month since I’ve shared a day-in-the-life blog post so I wanted to share what life looks like over here right now as we continue to adjust to life with the newest addition to our family.

Bless my mom and Ryan for taking over all the kid stuff first thing in the morning yesterday because after passing Rhett off at 3:45 a.m. after several hours of restlessness and zero sleep, I crashed hard from 4 – 7 a.m. and emerged feeling like an actual human. Victory!

Ryan had Chase and Ryder’s preschool lunches all packed up and my mom was snuggling with Rhett when I emerged from my cocoon of comforters and blankets and I scooped Rhett up and nursed him as I joined in the big kid chaos. 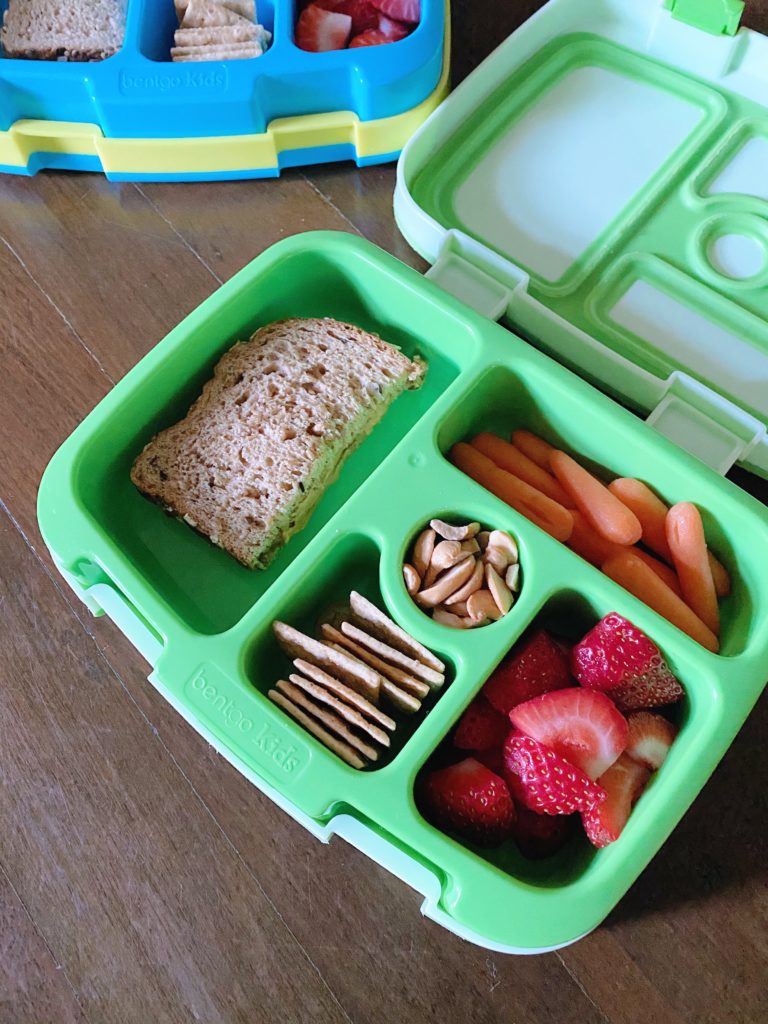 Then it was coffee time! 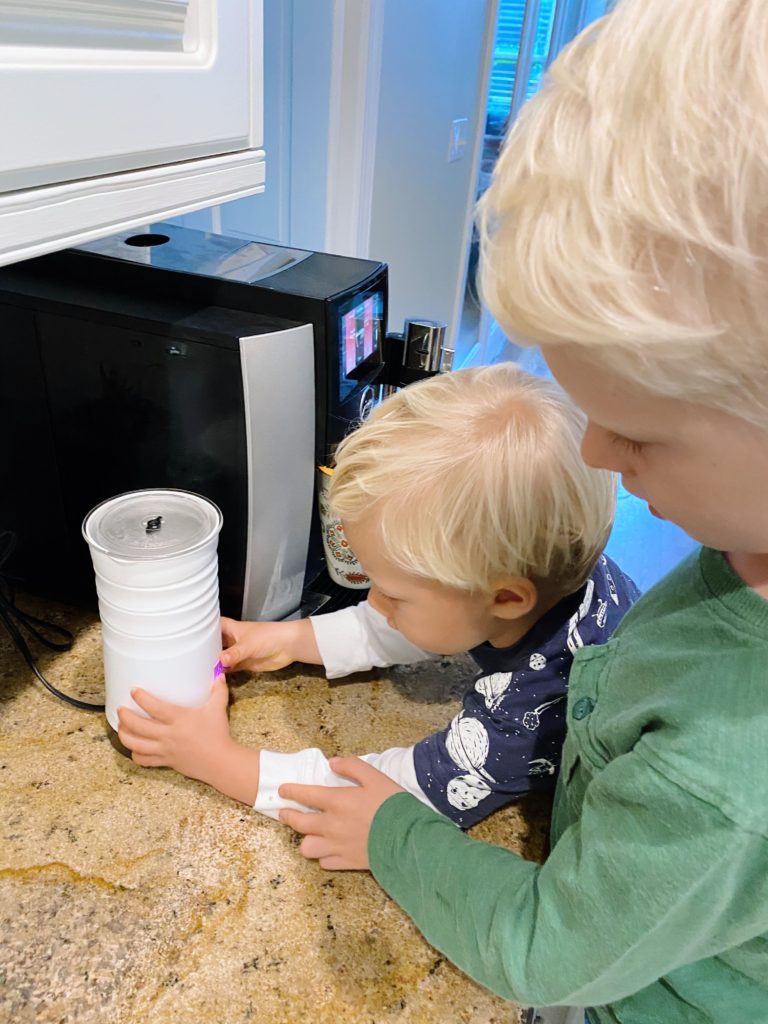 Chase and Ryder served as my little baristas and helped me make a cup of coffee with collagen and frothy coconut milk that I sipped as a I ate a homemade apple cinnamon muffin. I ended up taking most of my coffee to go because preschool drop-off sneaked up on us as it seems to do these days! 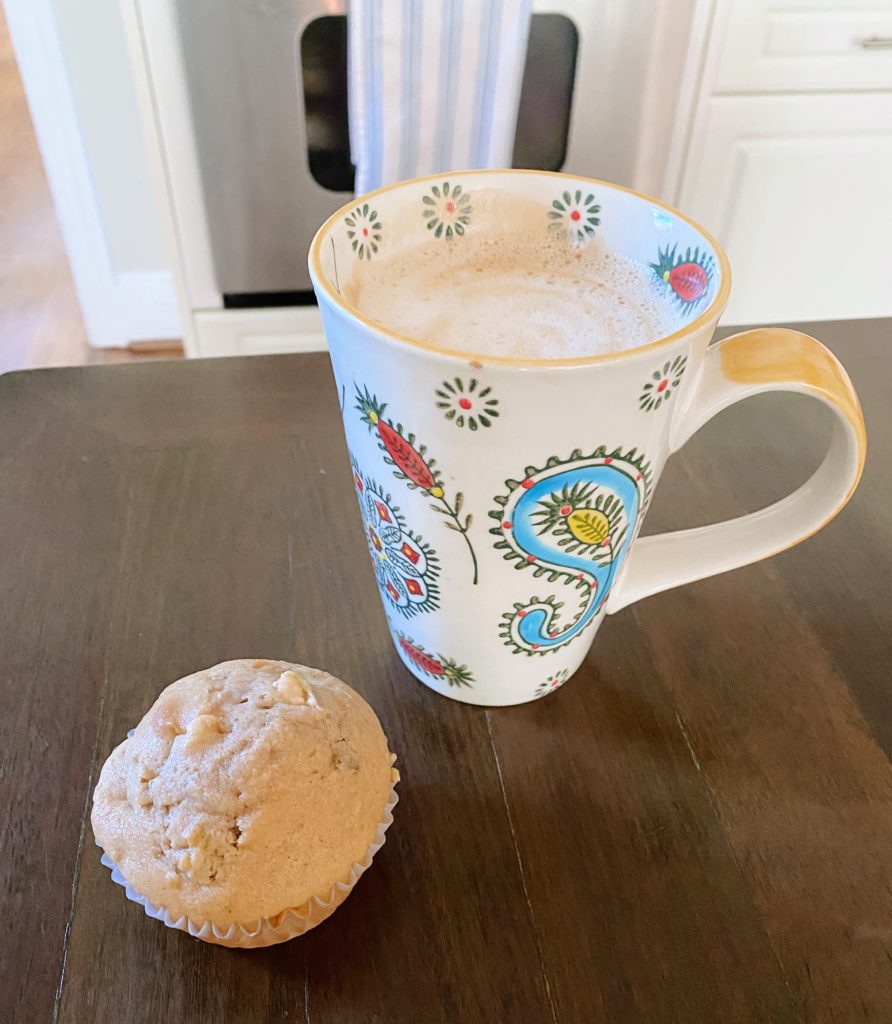 This is the first week of “real” preschool for our big boys, as the past two weeks their school did a staggered start. Rhett hung back with my mom (Ryan was upstairs in our bedroom at this point where he continues to work from home these days) and I brought Chase and Ryder to school before swinging by UPS to drop off some Amazon returns and making my way back home.

After I walked through the door, Rhett started crying again, so I quickly nursed him and said goodbye to my mom as she headed out for a car appointment. (Her car is having some issues she wanted to get checked out before her drive back to Florida on Friday.) Rhett seemed wide awake as I nursed him, so we followed up his feeding session with some play time on his play mat. 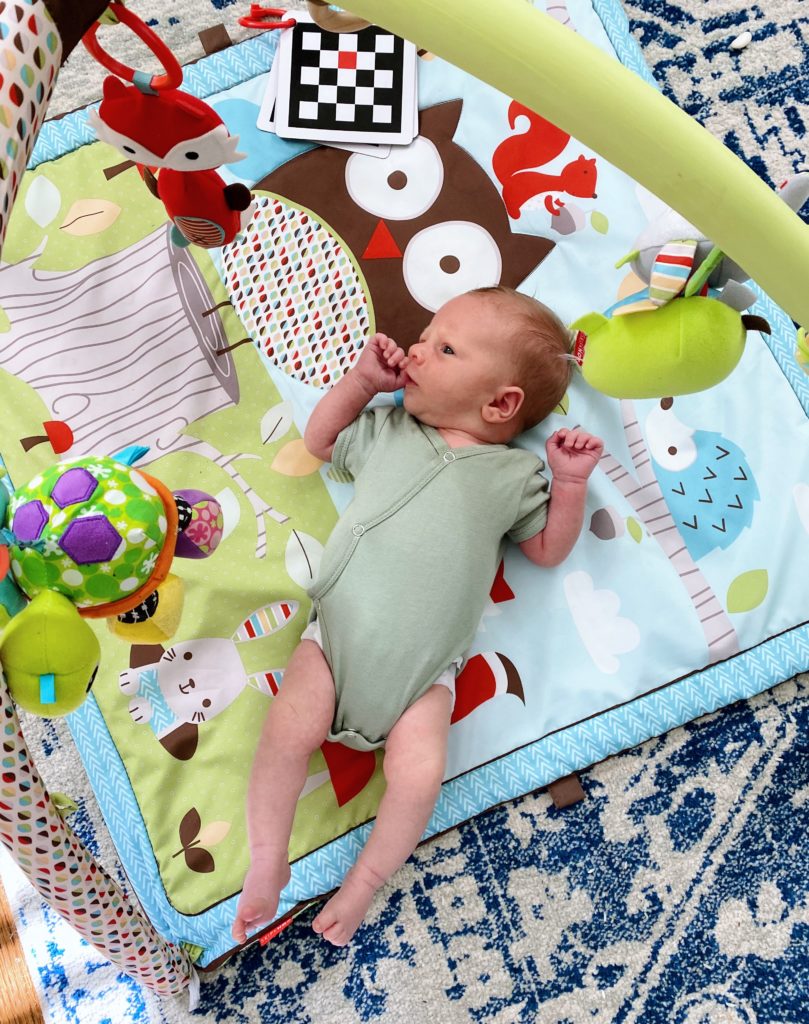 He seemed content to look at the little dangling toys above him, so I took advantage of a happy baby and made myself some oatmeal for breakfast 2.0. 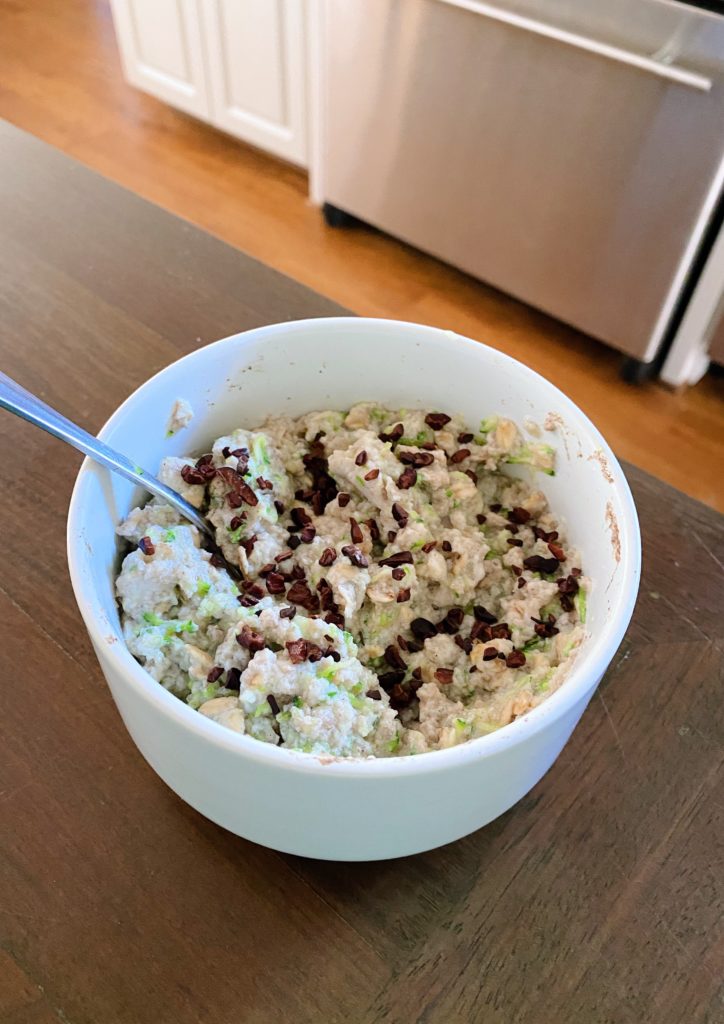 This combination looked like oats, banana, cashew butter, egg whites, cinnamon, shredded zucchini and cacao nibs. I’m all about oats these days because I truly believe they help my milk supply and this combination reminded me a bit of zucchini bread.

I hoped Rhett would settle for his nap soon after his play time but he had other plans and I ended up walking around with him and nursing him off and on for a couple of hours while I stress-ate several handfuls of chocolate chips before he eventually drifted off into a solid sleep for about an hour. Sadie took full advantage of me being baby-free and curled up next to me on the couch as I got some work done on my laptop. 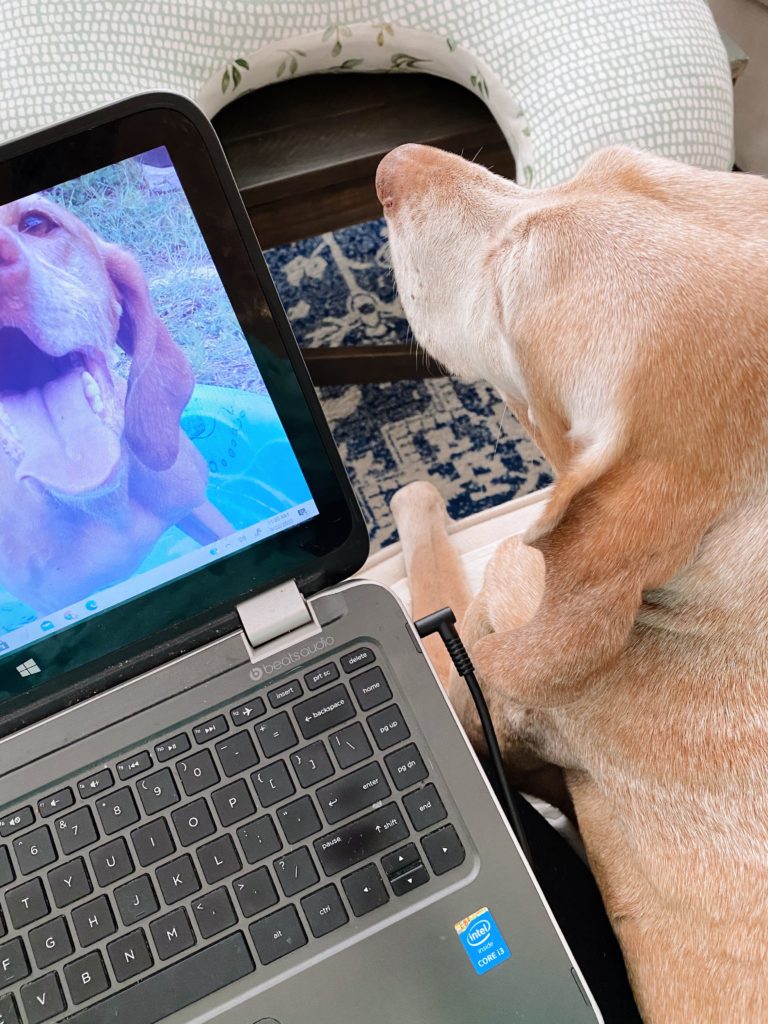 I think she appreciates the fact that even after three kids, she’s still front-and-center as the background on my computer.

My mom arrived back home just before preschool pickup and stayed back with Rhett again so I could pick up Chase and Ryder and bring them back home. They seemed to have a great day at school and we drove home as Ryder sang the “how I wonder what you are” line from Twinkle, Twinkle Little Star over and over again and Chase told me all about his day. 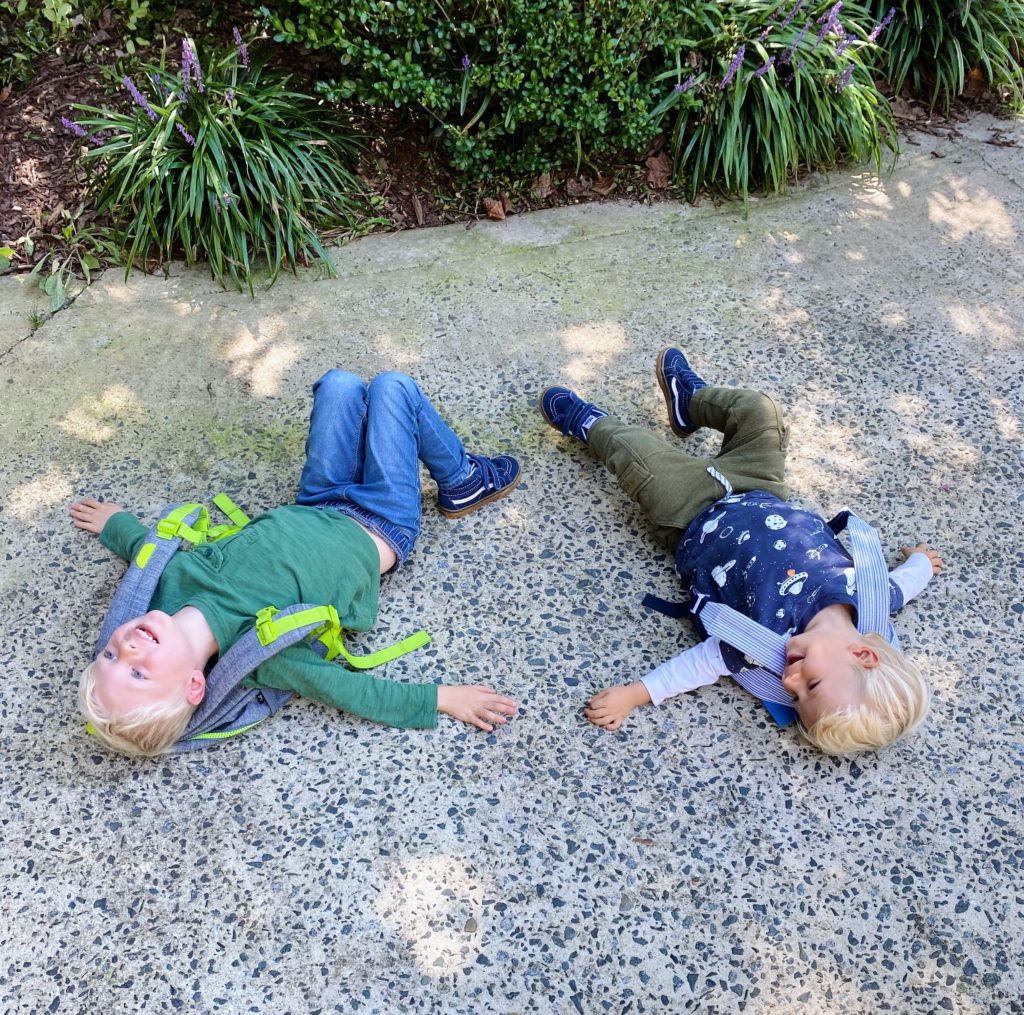 (They did twirls in our driveway when we arrived home and collapsed giggling because they were “so dizzy.”)

Once we were back home, both boys ate an afternoon snack and then I settled Ryder down for his nap and reheated some leftovers for lunch. 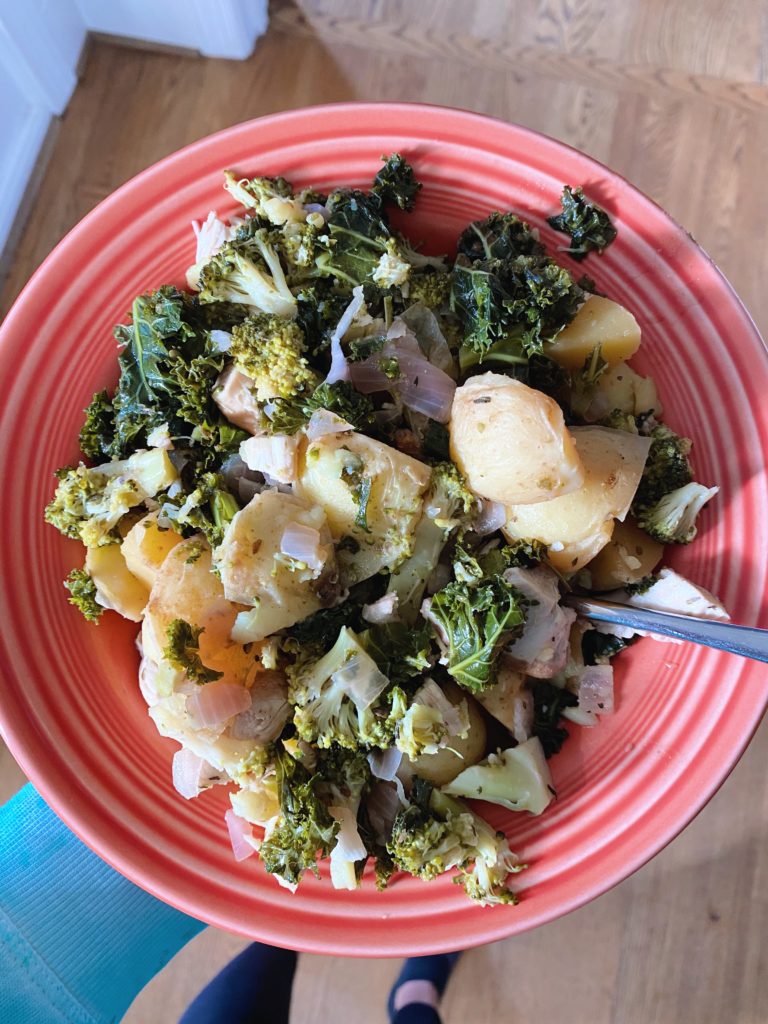 Leftovers looked like this balsamic chicken Instant Pot recipe with potatoes, broccoli and kale. It was a winner on day one and also on day two!

About an hour or so later, I was still a little hungry, so I whipped up a smoothie from Daily Harvest to enjoy as well. 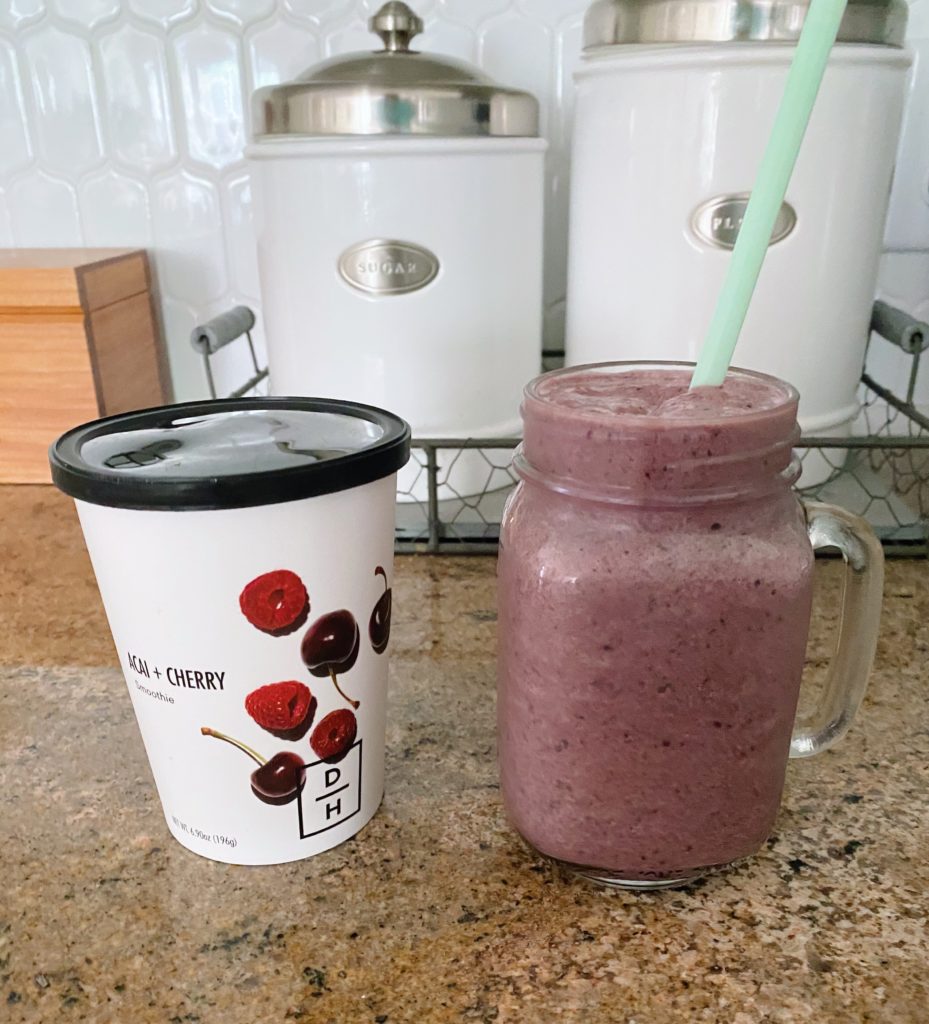 I’ve been a Daily Harvest fan for years now but man oh man do I appreciate their harvest bowls and smoothies even more during the postpartum period of life. Anything that lets me get some nutritious food in my body without much effort is a major win for me right now. (Also, just a reminder that you may use my affiliate link + the code pbfingers to get $25 off your first box if you’d like to give some Daily Harvest goodies a try!)

The afternoon passed by in a blur of nursing Rhett, watching Chase hunt for creatures in our backyard and attempting to squeeze in a little work and a load of laundry. Once Ryder was up, he joined Chase outside for creature hunting and outside play and my mom and I tag-teamed watching Rhett, playing with the big kids outside and dinner prep. 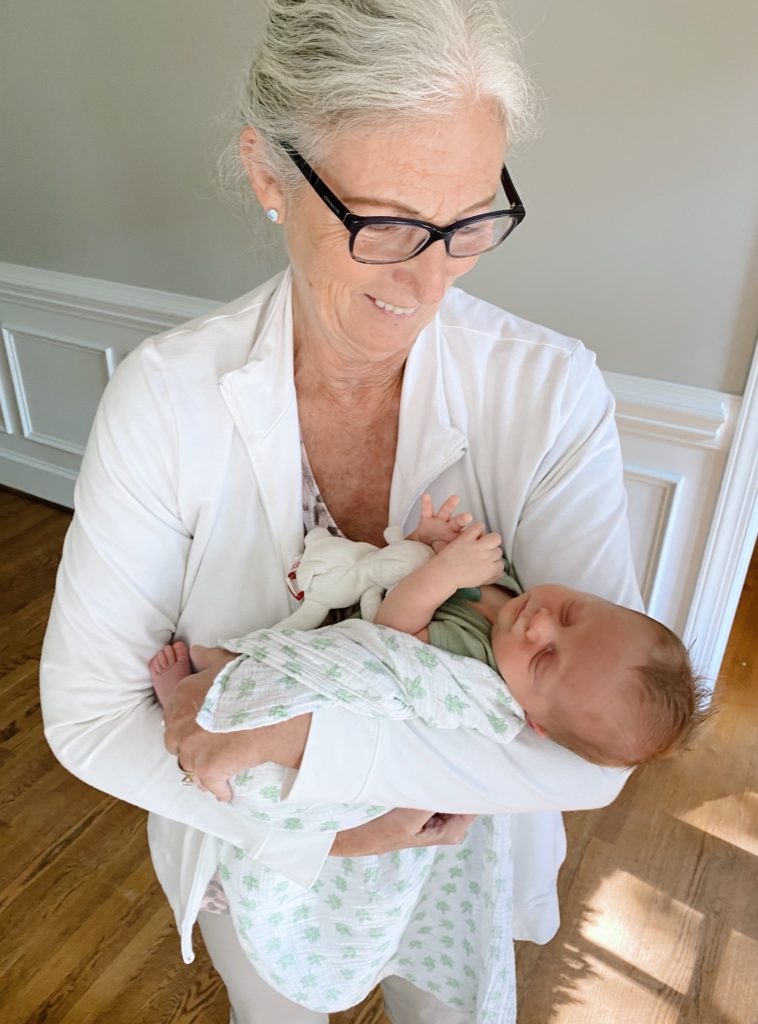 Dinner last night was pretty darn simple and looked like baked BBQ chicken thighs, curried corn (a go-to side dish around here lately — I need to share this recipe with you guys!) and baked beans. 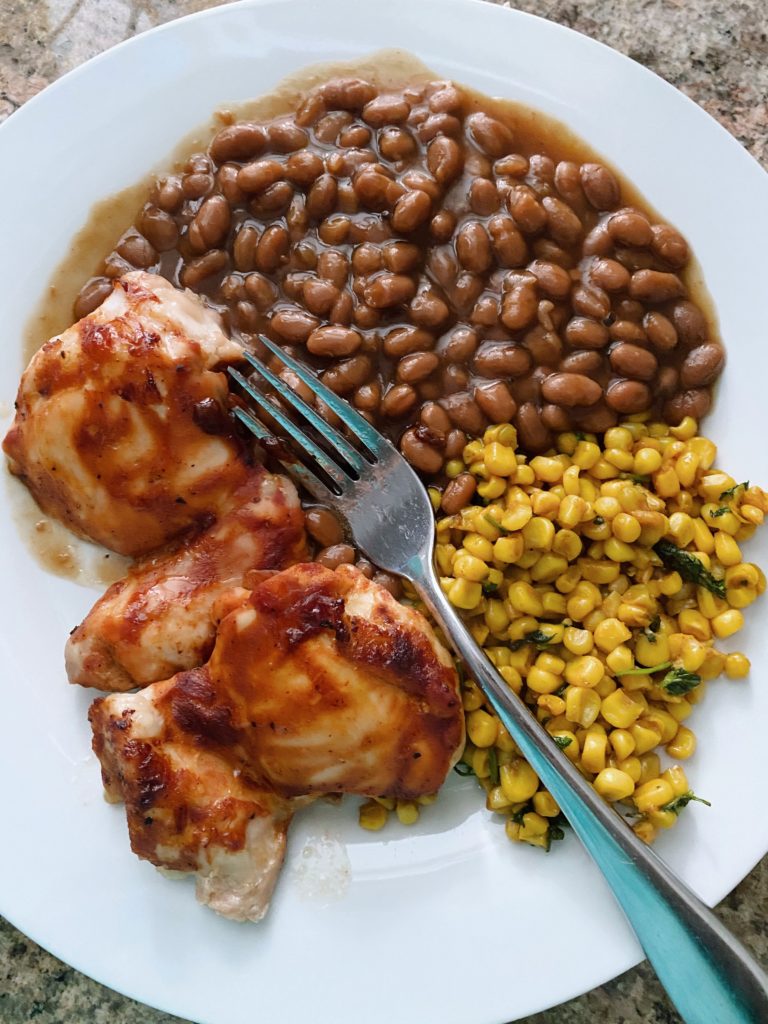 After dinner, Ryan and I put Chase and Ryder to bed and then did our best to settle Rhett and head to bed early ourselves. I’ve been a reading machine lately (I try not to look at my phone when I’m up in the middle of the night nursing and opt for reading on my Kindle instead) and just finished The Lying Game by Ruth Ware and The Girl from Widow Hills by Megan Miranda and loved both of them. Last night I started reading The Last House Guest, another novel by Megan Miranda, and am already very into it as well! I’m feelin’ suspense books lately and read until my eyes would no longer stay open… and then again during a couple of my middle-of-the-night nursing sessions. Rhett thankfully had a much better night last night and settled relatively quickly after nursing which felt like a gift.

Now I’m hoping to sneak in a quick shower before the day gets going (postpartum night sweats are REAL) and I’m also hoping to have some time amid the kid chaos to work on Friday’s post so I can have a little somethin’ somethin’ to share with you on the blog on Friday morning, too.

Thanks for stopping by PBF and tolerating my long-winded blog posts and typos during this crazy phase of life! I hope you have a great Wednesday!